“Why are those folks outranking me in Google’s local pack?”

If you or a client is asking this question, the answer lies in competitive analysis. You’ve got to stack Business A up against Business B to identify the strengths and weaknesses of both competitors, and then make an educated guess as to which factors Google is weighting most in the results for a specific search term.

Today, I’d like to share a real-world example of a random competitive audit, including a chart that depicts which factors I’ve investigated and explanatory tips and tools for how I came up with the numbers and facts. Also included: a downloadable version of the spreadsheet that you can use for your own company or clients. Your goal with this audit is to identify exactly how one player is winning the game so that you can create a to-do list for any company trying to move up in the rankings. Alternatively, some competitive audits can be defensive, identifying a dominant player’s weaknesses so that they can be corrected to ensure continued high rankings.

It’s my hope that seeing this audit in action will help you better answer the question of why “this person is outranking that person,” and that you may share with our community some analytical tips of your own! 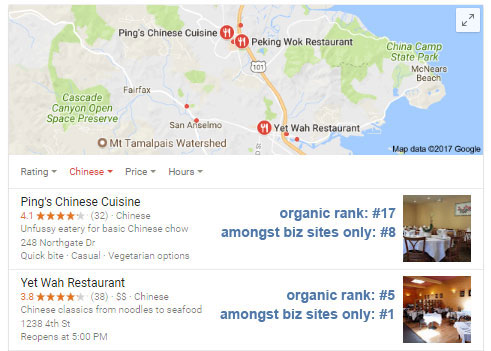 Statistics about San Rafael: A large town of approximately 22 square miles in the San Francisco Bay Area with a population of 58,954 and 15+ Chinese restaurants.

Consistency of results: From 20 miles away to 2000+ miles away, Ping’s Chinese Cuisine outranks Yet Wah Restaurant in Google’s local pack for the search term. We don’t look closer than 20 miles, or proximity of the searcher creates too much diversity.

The challenge: Why is Ping’s Chinese Cuisine outranking Yet Wah Restaurant in Google’s Local Pack for the search term?

Download your own version of my competitive audit spreadsheet by making a copy of the file.

Takeaways from the comparison chart

Yet Wah significantly outranks Ping’s in the organic results, but is being beaten by them in the Local Pack. Looking at the organic factors, we see evidence that, despite the fact that Ping’s has greater DA, greater PA of the GMB landing page, more links, and stronger links, they are not outranking Yet Wah organically. This is something of a surprise that leads us to look at their content and on-page SEO.

While Ping’s has slightly better text content on their website, they have almost done almost zero optimization work, their URLs have canonical issues, and their robots.txt isn’t properly configured. Yet Wah has almost no on-site content, but they have modestly optimized their title tags, implemented H tags and some schema, and their site passes Google’s mobile-friendly test.

So, our theory regarding Yet Wah’s superior organic ranking is that, in this particular case, Yet Wah’s moderate efforts with on-page SEO have managed to beat out Ping’s superior DA/PA/link metrics. Yet Wah’s website is also a couple of years older than Ping’s.

All that being said, Yet Wah’s organic win is failing to translate into a local win for them. How can we explain Ping’s local win? Ping’s has a slightly higher overall review rating, higher DA and GMB landing page PA, more total links, and higher authority links. They also have slightly more text content on their website, even if it’s not optimized.

So, our theory regarding Ping’s superior local rank is that, in this particular case, website authority/links appear to be winning the day for Ping’s. And the basic website text they have could possibly be contributing, despite lack of optimization.

Things that bother me

By the end of the audit, I’ve come up with a working theory, but I’m not 100% satisfied with it. It makes me ask questions like:

*I don’t have access to either restaurant’s Google Analytics, GMB Insights, or Google Search Console accounts, so perhaps that would turn up penalties, traffic patterns, or things like superior clicks-to-call, clicks-for-directions, or clicks-to-website that would make Ping’s local win easier to explain. If one of these restaurants were your client, you’d want to add chart rows for these things based on full access to the brand’s accounts and tools, and whatever data your tools can access about the competitor. For example, using a tool like SimilarWeb, I see that between May and June of this year, YetWah’s traffic rose from an average 150 monthly visits up to a peak of 500, while Ping’s saw a drop from 700 to 350 visits in that same period. Also, in a scenario in which one or both parties have a large or complex link profile, you might want additional rows for link metrics, taken from tools like Moz Pro, Ahrefs, or Majestic.

In this case, Ping’s has 7 total wins in my chart and Yet Wah has 9. The best I can do is look at which factors each business is winning at to try to identify a pattern of what Google is weighting most, both organically and locally. With both restaurants being so basic in their marketing, and with neither one absolutely running away with the game, what we have here is a close race. While I’d love to be able to declare a totally obvious winner, the best I could do as a consultant, in this case, would be to draw up a plan of defense or offense.

If my client were Ping’s:

Ping’s needs to defend its #1 local ranking if it doesn’t want to lose it. Its greatest weaknesses which must be resolved are:

To remain strong, Ping’s should also work on:

Ping’s should accomplish these things to defend its current local rank and to try to move up organically.

If my client were Yet Wah:

Yet Wah needs to try to achieve victory over Ping’s in the local packs, as it has done in the organic results. To do that, Yet Wah should:

Yet Wah should also:

Yet Wah should accomplish these things in an effort to surpass Ping’s.

And, with either client being mine, I’d then be taking a second pass to further investigate anything problematic that came up in the initial audit, so that I could make further technical or creative suggestions.

Given that no competitor for this particular search term has been able to beat out Ping’s or Yet Wah in the local pack, and given the minimal efforts these two brands have thus far made, there’s a tremendous chance for any Chinese restaurant in San Rafael to become the dominant player. Any competitor that dedicates itself to running on all cylinders (professional, optimized website with great content, a healthy link profile, a competitive number of high-star reviews, healthy citations, etc.) could definitely surpass all other contestants. This is not a tough market and there are no players who can’t be bested.

My sample case has been, as I’ve said, a close race. You may be facing an audit where there are deeply entrenched dominant players whose statistics far surpass those of a business you’re hoping to assist. But the basic process is the same:

And don’t forget the user proximity factor. Any company’s most adjacent customers will see pack results that vary either slightly or significantly from what a user sees from 20, 50, or 1,000 miles away. In my specific study, it happened to be the third result in the pack that went haywire once a user got 50 miles away, while the top two remained dominant and statically ranked for searchers as far away as the East Coast.

Because of this phenomenon of distance, it’s vital for business owners to be educated about the fact that they are serving two user groups: one that is located in the neighborhood or city of the business, and another that could be anywhere in the country or the world. This doesn’t just matter for destinations like hotels or public amusements. In California (a big state), Internet users on a road trip from Palm Springs may be looking to end their 500-mile drive at a Chinese restaurant in San Rafael, so you can’t just think hyper-locally; you’ve got to see the bigger local picture. And you’ve got to do the analysis to find ways of winning as often as you can with both consumer groups.

You take it from here, auditor!

My local competitive audit chart is a basic one, looking at 30+ factors. What would you add? How would you improve it? Did I miss a GMB duplicate listing, or review spam? What’s working best for your agency in doing local audits these days? Do you use a chart, or just provide a high-level text summary of your internal findings? And, if you have any further theories as to how Ping’s is winning the local pack, I’d love for you to share them in the comments.